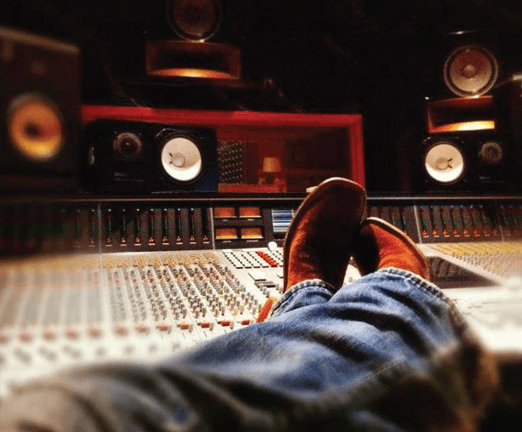 The Yamaha™ NS-10™ near-field monitor loudspeaker is an icon in the recording industry. More often than not, a photo showing a white-coned NS-10 sitting atop a mixing console accompanies articles about music producers, recording engineers, and recording studios. It is likely that the NS-10 is the single most photographed piece of recording gear ever. Thousands of rock ‘n roll recordings were mixed and mastered with the NS-10, including best-selling records by the most famous recording artists of modern popular music. Gizmodo was not exaggerating when they referred to the NS-10 as “the most important loudspeaker you never heard of." While newer studio monitors have come and gone, the NS-10 has survived as the de-facto standard in both professional and home recording studios worldwide.

Unlike Diamonds, Speakers are not Forever

The NS-10 was introduced in 1978 and discontinued in 2001. That means there are 40-year old NS-10's conceivably still in use! None are newer than 17 years old, and the bulk of them are 20 or more years old. A studio monitor, particularly when used to mix rock 'n roll, hip-hop, and techno, lives an especially hard life. They are often pushed past their design limits for hours at a time. Voice coils singe and deform; suspensions fatigue, causing a reduction in restoring force. The net result is increased distortion and eventual failure. This is an unacceptable state of affairs for an industry that relies on the consistency and reliability of its tools. Unfortunately, Yamaha stopped producing parts several years ago, and replacements are entirely unavailable. 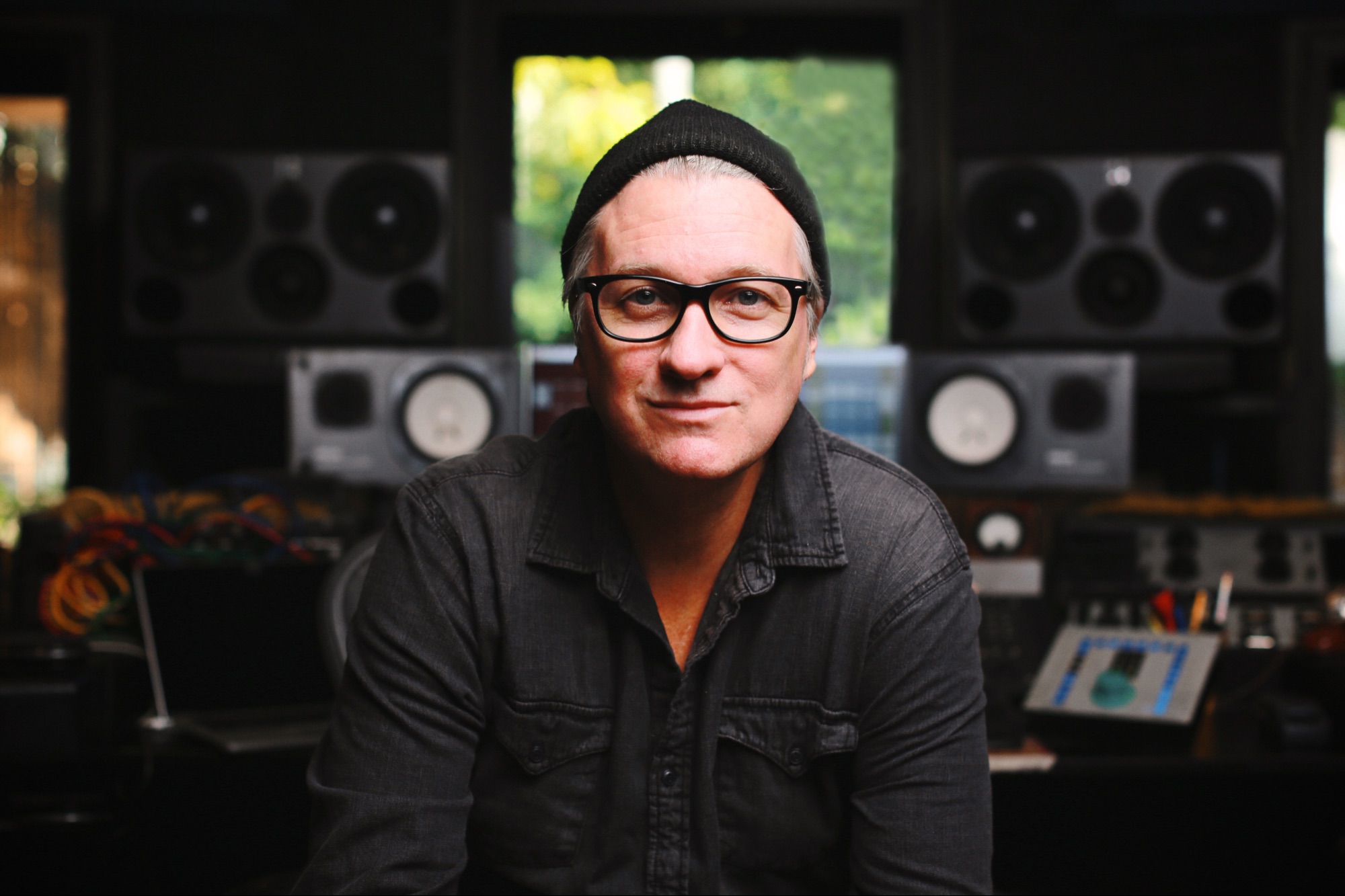 “Finally, someone did it! The NS-10 woofer has been resurrected!
Thanks Bold North for your commitment to replicating as opposed to ‘improving.’ I have total confidence in my new MS-10s!”

MISCO’s goal was not to improve upon the NS-10’s mid-woofer performance but to exactly match its sound better than any manufacturer has done. The target was the driver used in the NS-10M Studio™, the product iteration most often found in recording studios.

Making a drop-in driver with a white cone is easy; getting a perfect sonic signature match is very difficult.

There have been several attempts over recent years to replicate the sound of the NS10 driver; MISCO’s engineers believe that none have been successful, including MISCO’s own attempt several years ago. At the time of their previous effort to make a matching NS-10 driver, MISCO did not have the advantage of having a full set of Klippel vibrational analysis tools in-house as they are now. As is shown by the graphs below, a recently introduced "drop-in replacement" by a well-respected competitor has fallen short of the goal as well.

Early on the MISCO team realized that frequency response alone is not a perfect predictor of matching the Yamaha’s sonic signature—but it is a vital first step. Other factors such as distortion, dispersion, and sensitivity play a significant role as well.

Fortunately, MISCO owns one of the most completely equipped loudspeaker measurement labs in North America – Warkwyn. Using Warkwyn’s state of the art Klippel laser-based Scanning Vibrometer, and Near Field Scanner MISCO engineers were able to pinpoint those factors that make an NS-10 driver sound like it does, and choose the materials and tuning needed to match the iconic NS10 sound.

The project started with a laser scan of the cone geometry to aid in perfectly matching the original. While some manufacturers have attempted to copy the NS-10 woofer using a seamless molded cone, MISCO found it necessary to use the same seamed paper cone design as the NS-10 to capture the very essence of its signature sound. As seamed cones with the right material properties were not readily available, MISCO opted to manufacture a paper pulp seamed cone in their St. Paul, MN factory.

Based on their measurements the team built dozens of prototypes and measured them using the same advanced equipment used to measure the Yamaha. Ultimately, they came upon the combination of materials, alignment and manufacturing techniques that matched the NS-10 driver.

With valuable feedback from these and other recording professionals, the team continued to tweak the design until they had zeroed-in on a woofer that would indeed be an ideal drop-in replacement driver for the thousands of NS-10 systems out there in need, or soon to be in need, of new drivers. 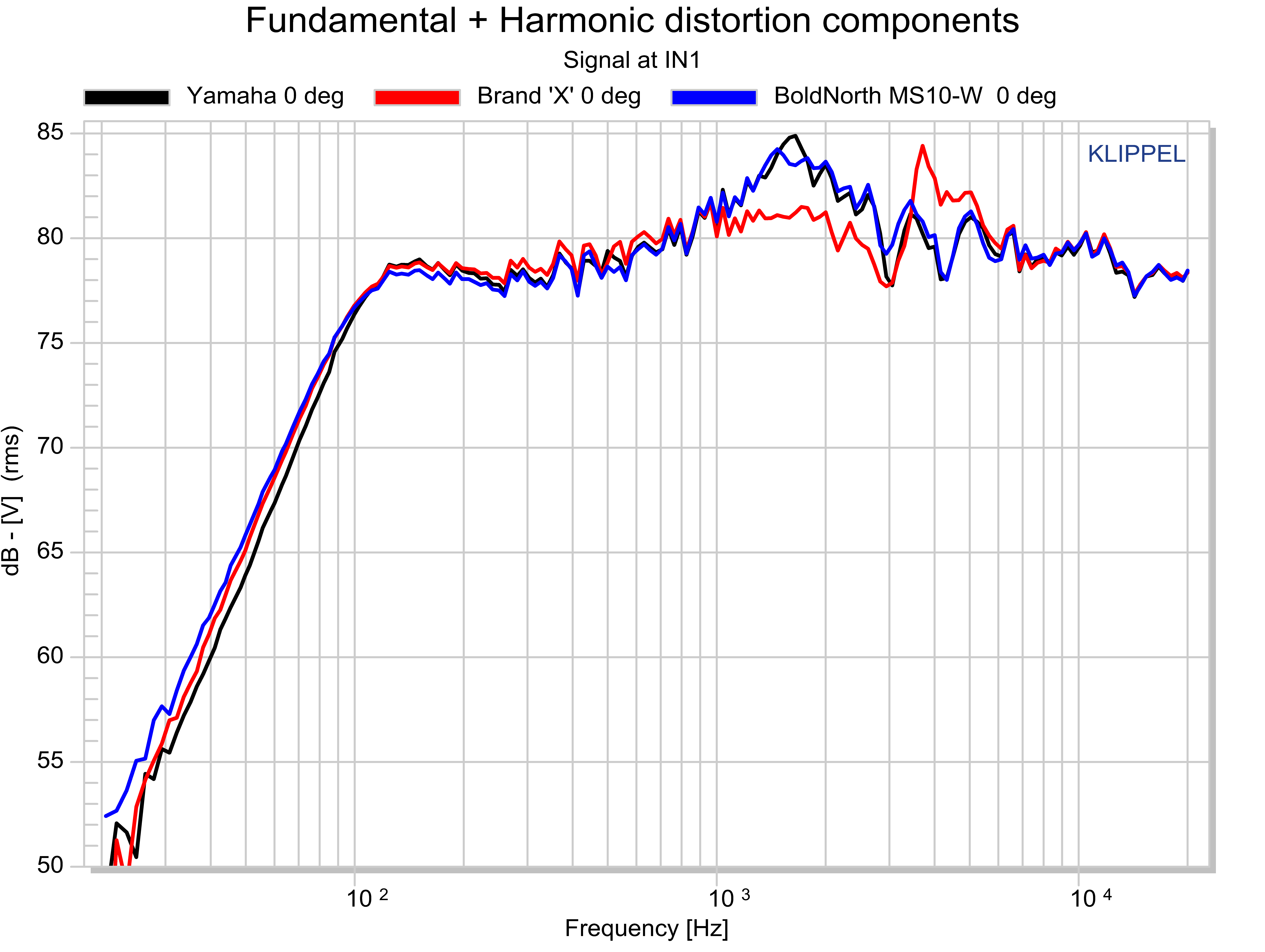 The differences are even more striking when comparing off-axis performance as shown in the graphs below. 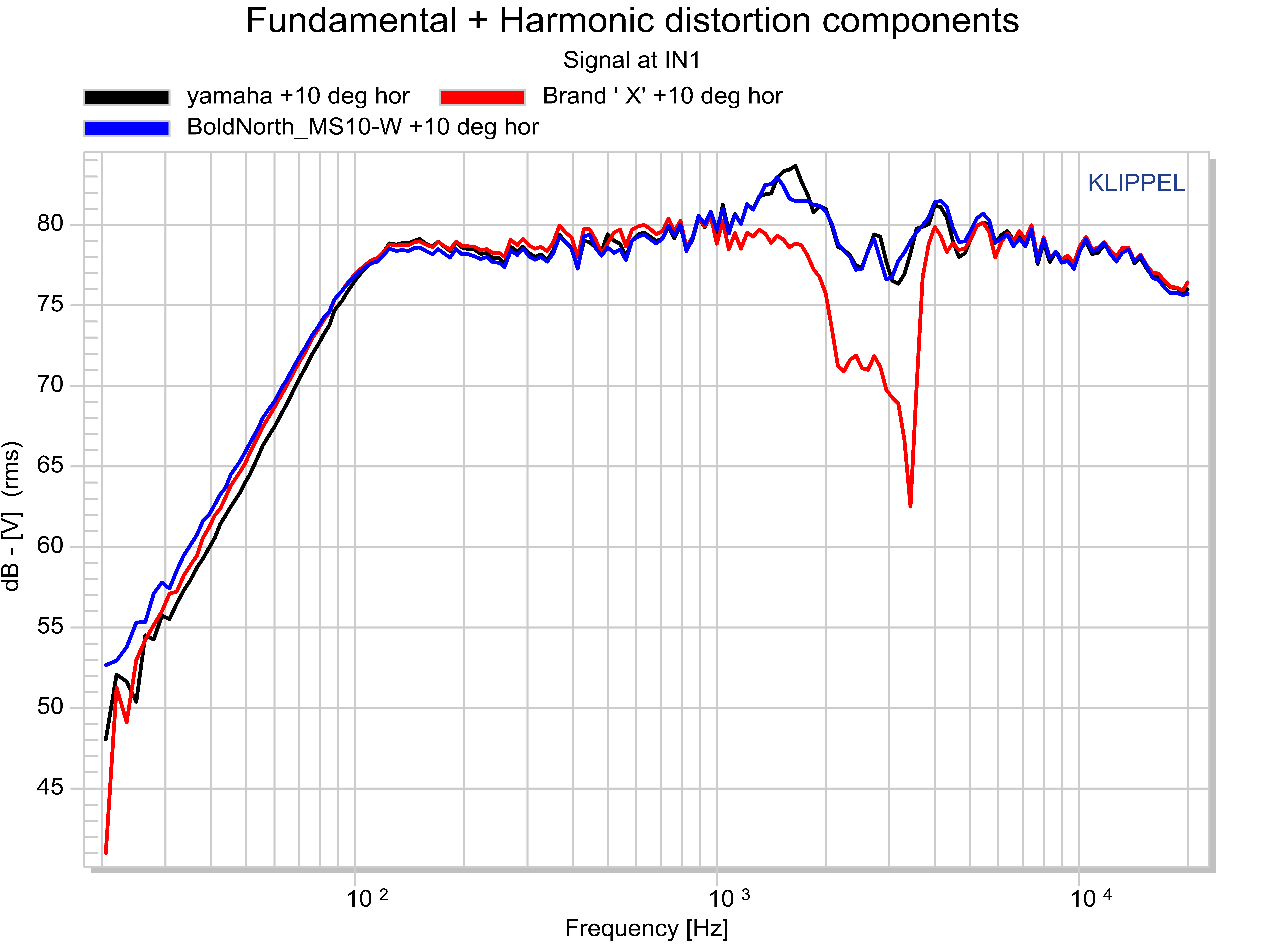 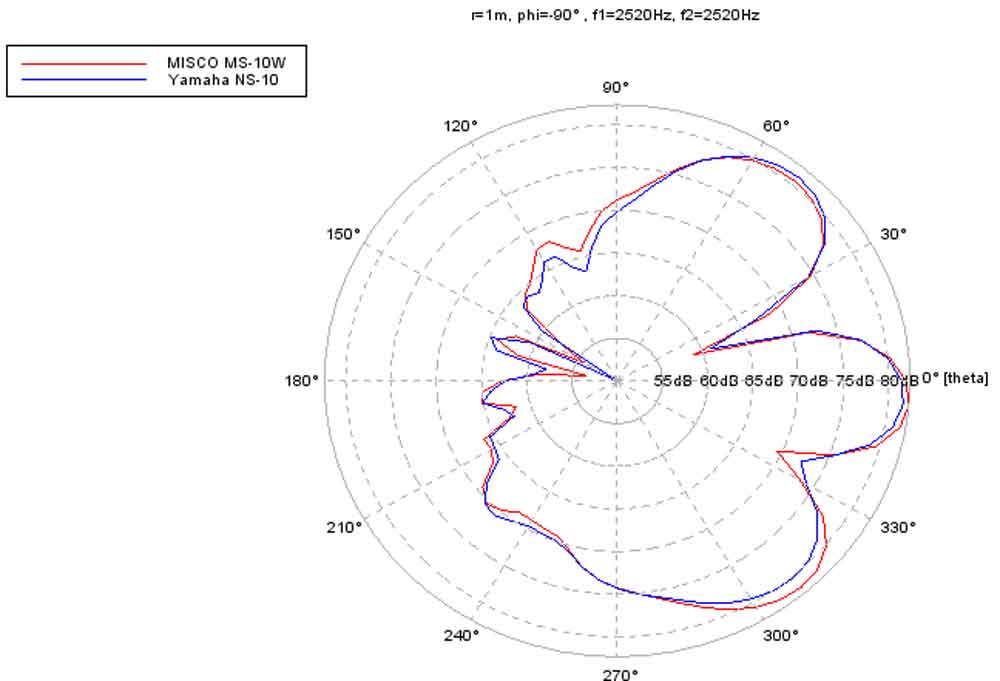 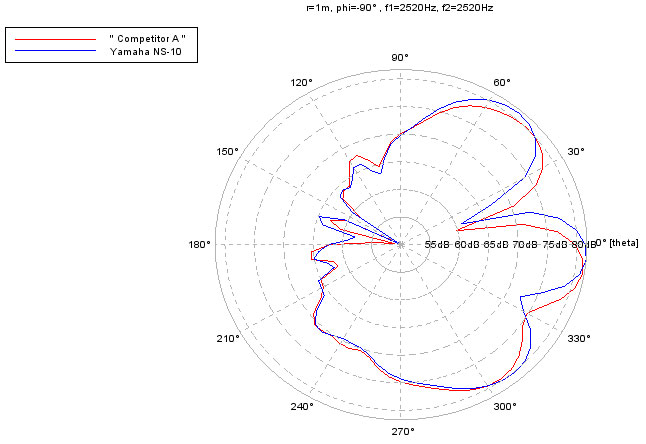 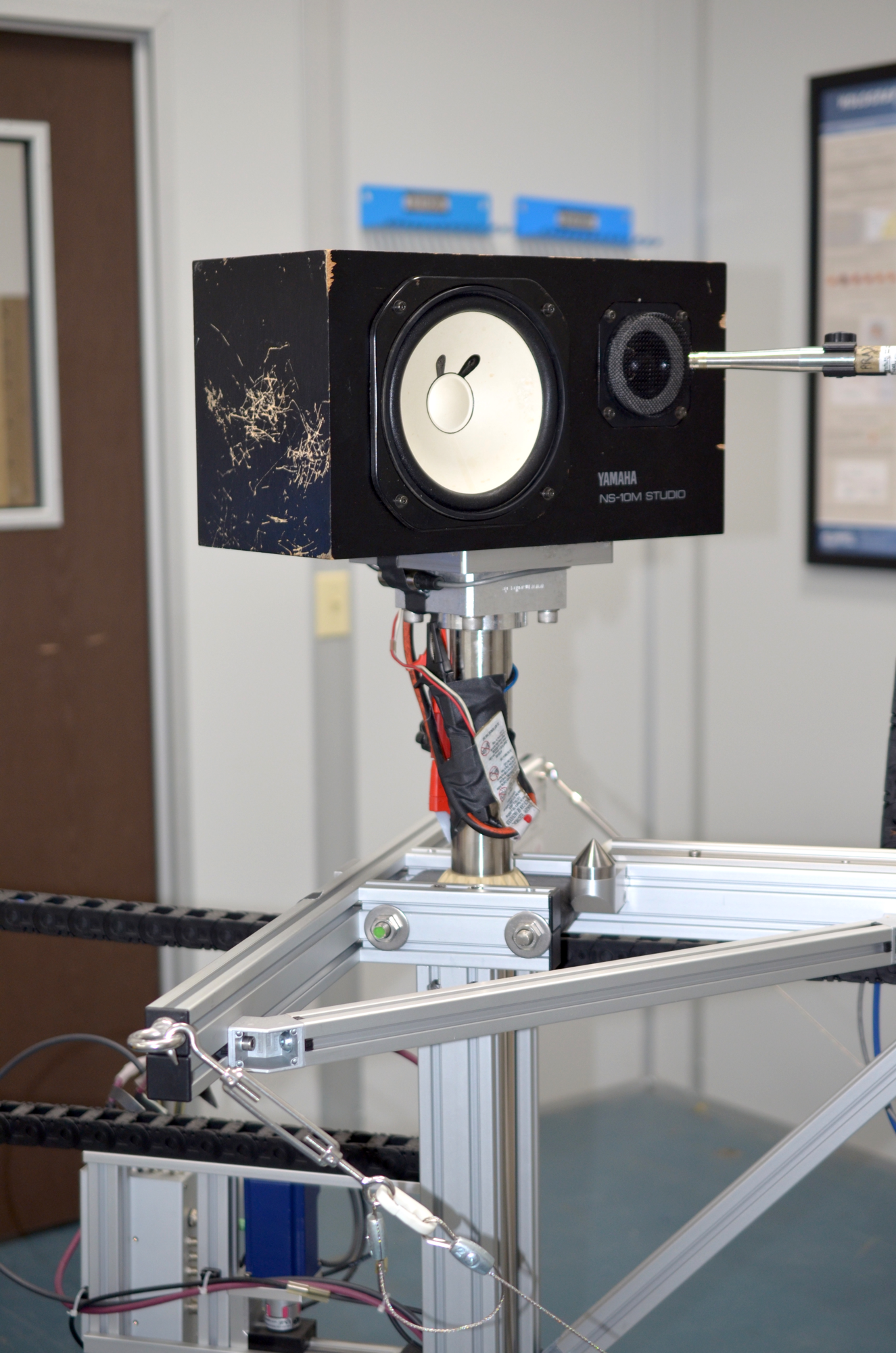 MS10-W in a well-used NS-10, under test on a Klippel Near Field Scanner 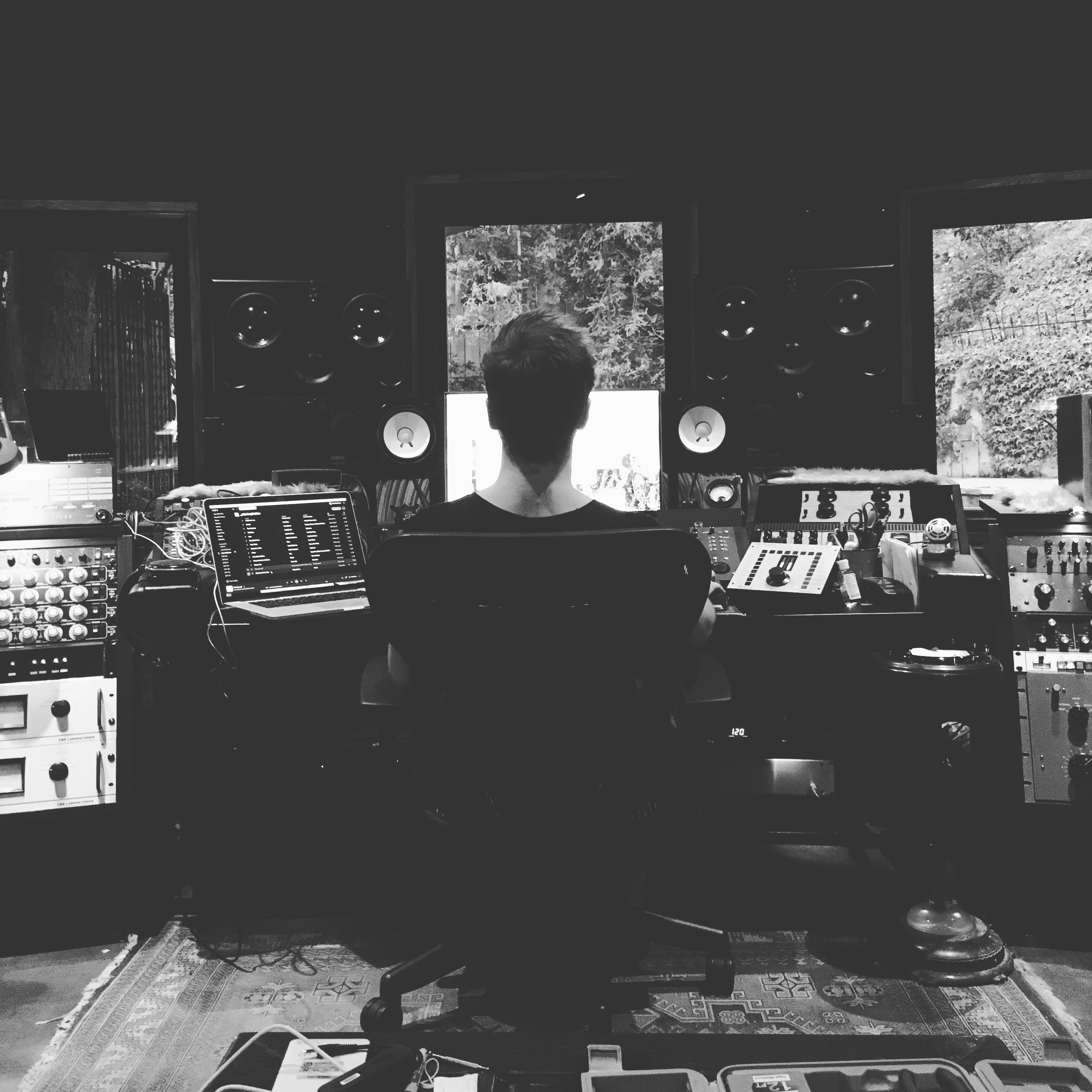 The images below are Klippel scans showing SPL output across the cone surface at 2kHz and 3kHz. Again, the Bold North Audio driver is nearly identical to the original Yamaha whereas the so-called "drop-in replacement" driver behaves very differently. These frequencies are particularly important as they lie at and just beyond the crossover center point. Miss here and you've missed the fundamental character of the NS-10, and missed the goal to sound the same. 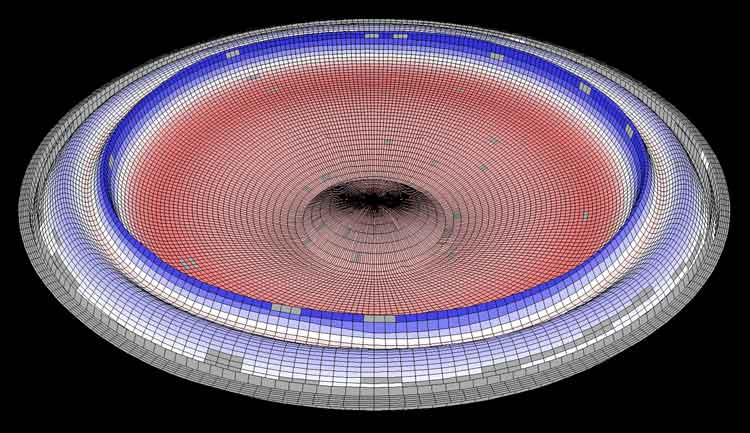 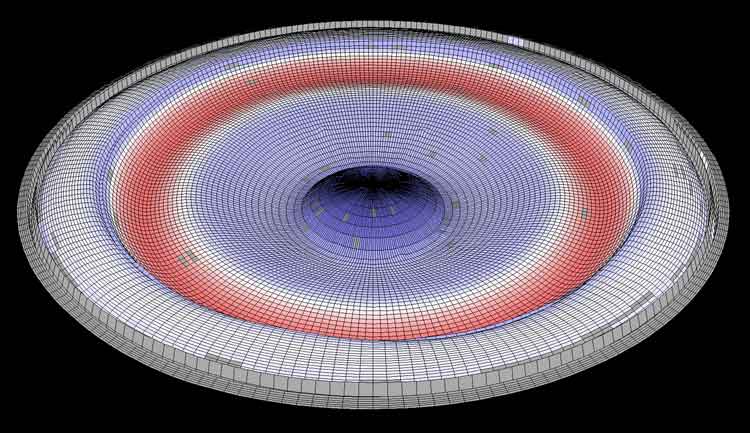 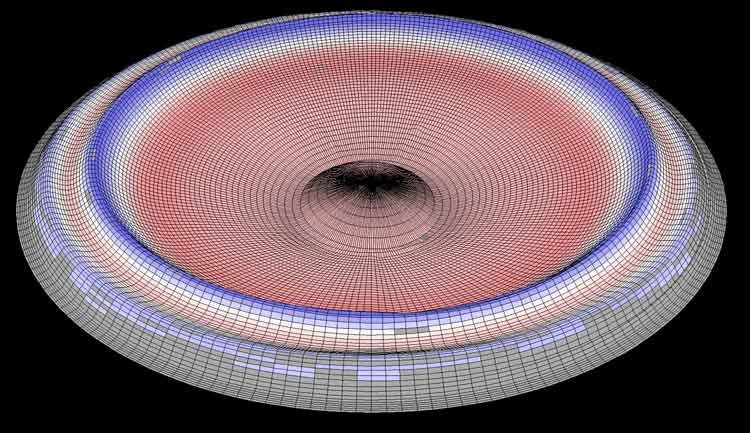 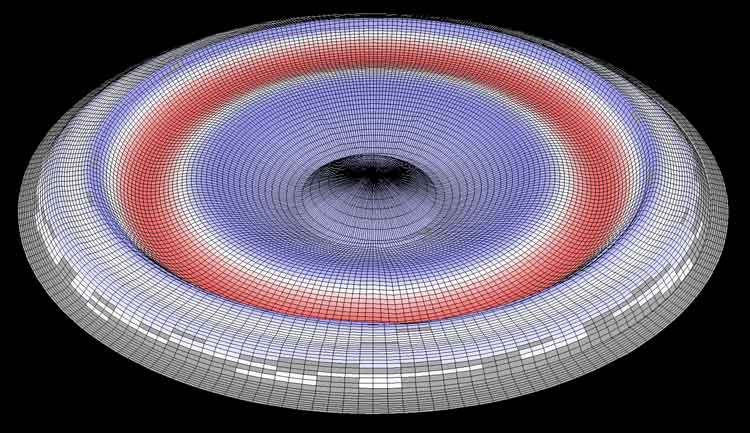 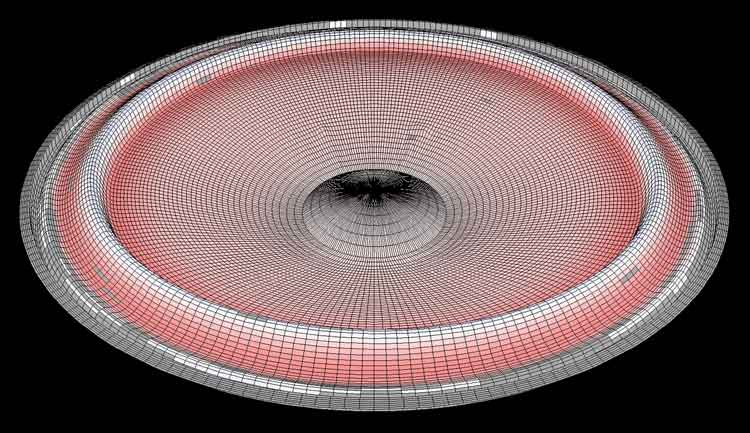 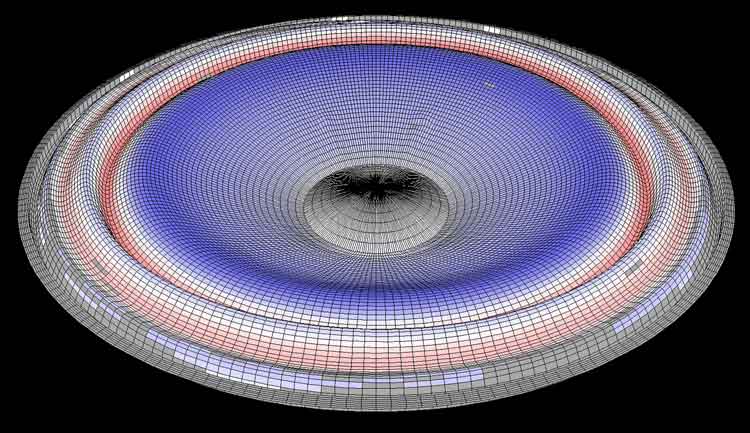 The scans below illustrate the phase nodes of the three cones at 3kHz. They perfectly demonstrate the vibrational effects of the seamed cone of the Yamaha™ and Bold North Audio drivers pictured with cone seams at “12:00” on the scan. The competitor’s model, without a seamed cone, has significantly different modal behavior when compared to the original Yamaha™ at this frequency. A critical listen to the three drivers confirms that the measurements are accurate predictors of audible performance. 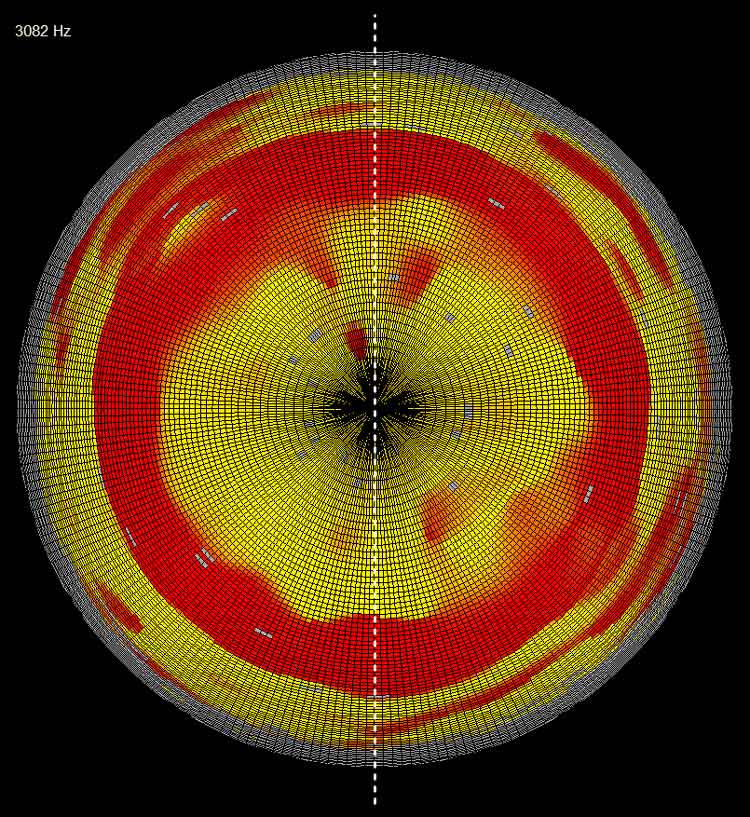 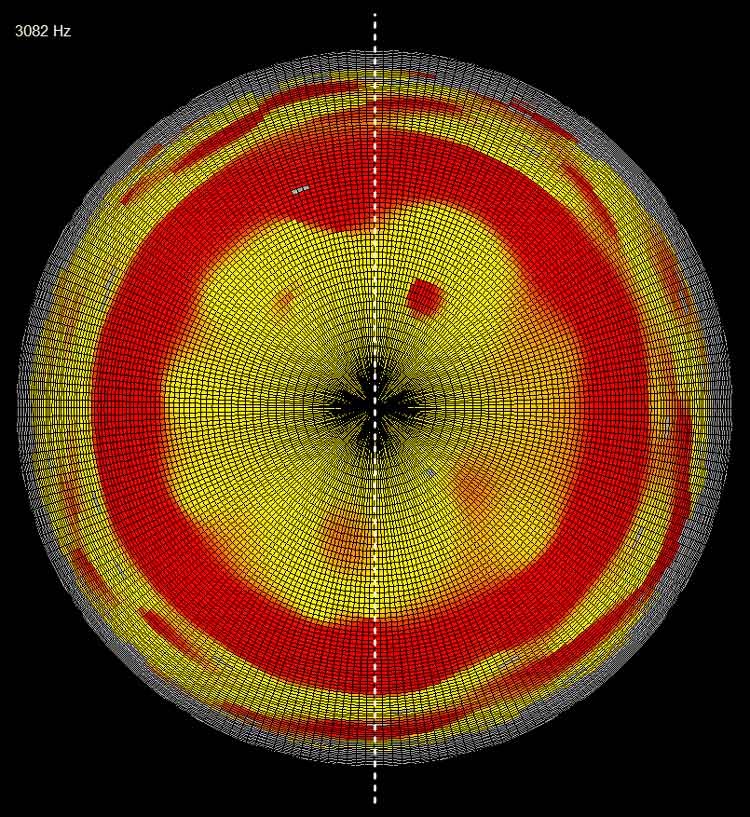 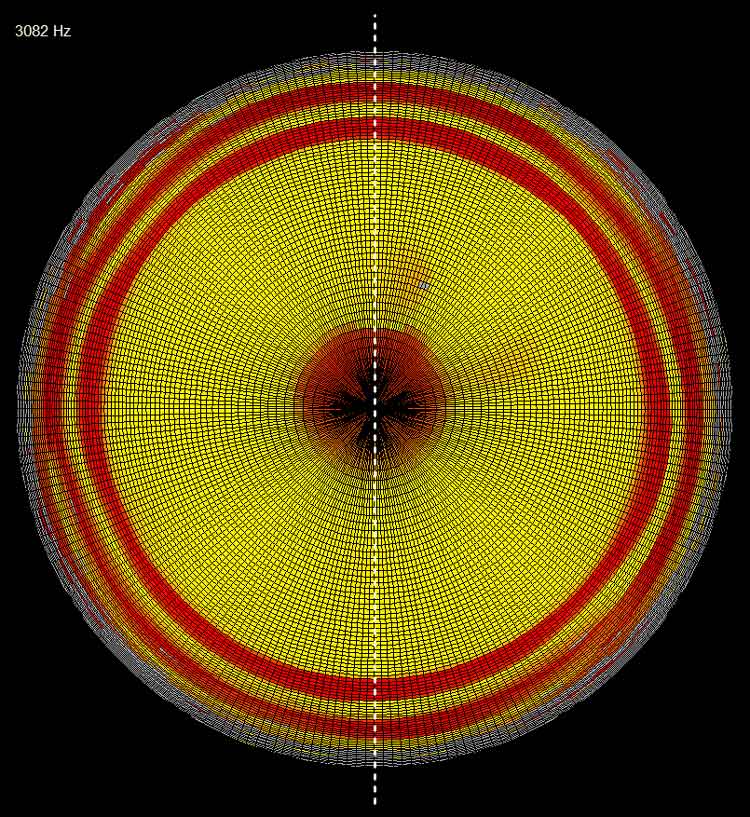 The Bold North Audio MS10-W is assembled in MISCO’s St. Paul, MN factory under the supervision of the engineers who designed it. Every single production unit is tested using Klippel quality control apparatus to ensure exceptional unit-to-unit consistency. The MS10-W earned “Klippel Verified” status, that indicates the state of the art Klippel equipment has been used 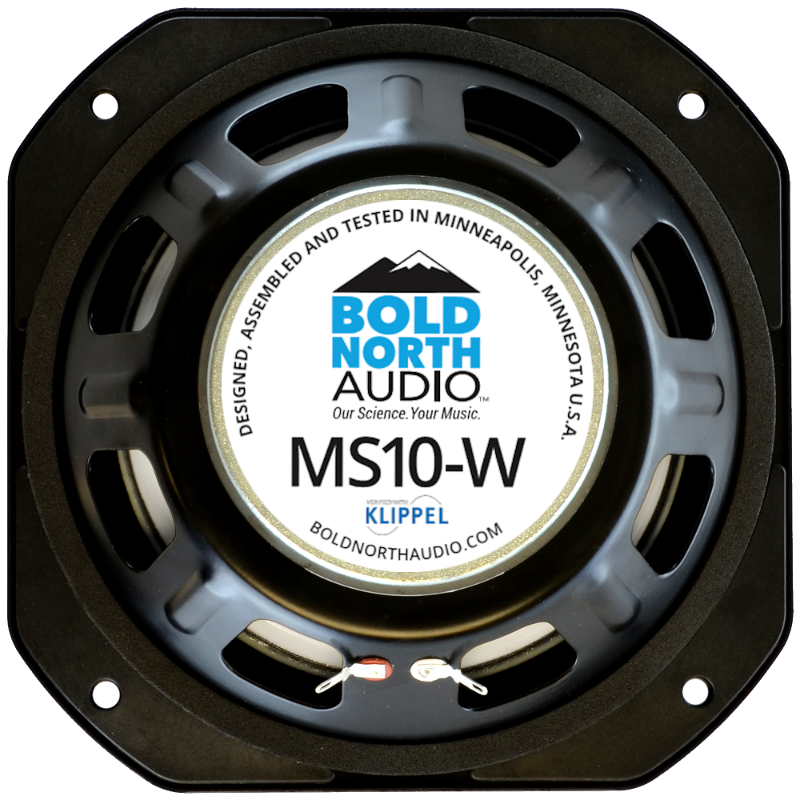 from design all the way through to end-of-line QC. The MS10-W is packaged and sold individually, but MISCO highly recommends that NS-10™ owners replace both mid-woofers at the same time. Driver suspensions and other parameters change over time such that a new production driver cannot match the sound of an older driver. For the best imaging and sound staging it is essential that left and right speakers be as closely matched as possible. Replacing both mid-woofers with MS10-W units, in essence, brings the speaker system back to the sound of a new pair of NS-10s (assuming the tweeters and crossovers are working correctly). 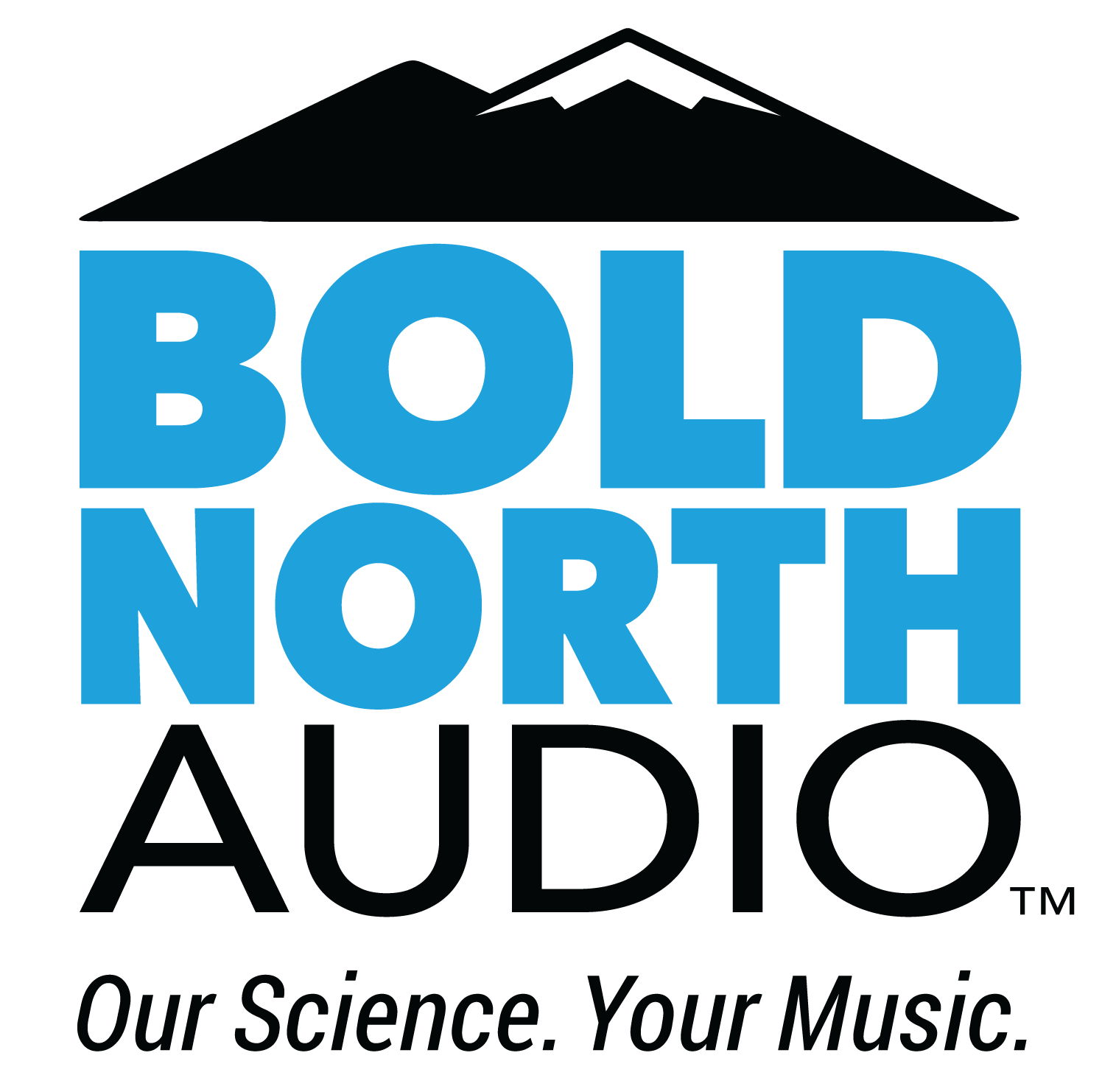 Seventy years ago Cliff Digre started the Minneapolis Speaker Company – now MISCO. A son of Norwegian immigrants who settled in Minnesota, his vision for the little company was bold—to challenge the established loudspeaker industry with more creative solutions and superior client service. And it is our inspiration today in the creation of a new brand of component loudspeakers and audio systems – Bold North Audio. Bold North Audio products aspire to be the most accurate, true-to-life, and revealing audio transducers and systems available of home hi-fi, monitoring, and pro audio applications. Bold North Audio world-class performance is rooted in fundamental scientific research, careful materials selection, precision manufacturing and most of all, love of music. The Bold North Audio (BNA) team of designers and engineers has harnessed cutting-edge Klippel vibrational analysis science to reveal the keys to superior audio performance. While they rely heavily on objective science to lead them, they are not slaves to it and understand that most of all speakers need to tell the musical truth. BNA’s engineers, musicians, and recording studio veterans are the final judges of when a design is worthy of the Bold North Audio logo. The MS10-W driver is the first product to be released under the Bold North Audio banner. Future products under development include ultra-premium quality midranges, woofers, and tweeters.

FREE SHIPPING through November in the Continental U.S.

For best results replace both woofers at the same time